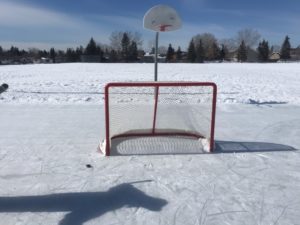 Hockey nets and skating rinks go together like peanut butter and jelly! The Pineridge Community Association (PCA) had its rink but needed a few hockey nets to complete it. The nets were purchased at the end of the year and were well received by the community. A few neighborhood kids, who use the rink regularly, even cleared snow off the ice to make space for the nets, according to the organizers.

The rink was so well taken care of, neighbours were surprised to find out that it was run by community members and not City employees! The ActivateYYC grant was used to purchase the nets, as the rink was already set up.